Posted on August 15, 2013 by animalsdohaveavoice

Today, Rentokil celebrates its 85th anniversary in killing animals.  So to celebrate they decided to set up a pop-up restaurant selling Pigeon meat and insects (some coated in chocolate) in the heart of London next to St Pauls.  It turns out that the meat actually contains venison, bacon as well as pigeon, not just pigeon meat as it claims (in fact wood-pigeon).

The food being offered was free, hence the queue.  People of all colours and backgrounds were intrigued and queuing up.

When I asked the tall white-haired chap, if this was legal and where he obtained the pigeons from ? ie Are they from pest control jobs rentokil have been involved in ?
He responded “Oh no, we’re not allowed to do that.  The chef obtained them”  he said with a smile on this face.

To which I said “Are pigeons not protected in the 1981 Wildlife Act ?”
His response: “If you have a licence to shoot, you can shoot a pigeon, these are wood pigeon which can be shot”

As usual, anything written as law is always a blurb, you need to wear 6 different hats to make any sense.  In essence you are not allowed to harm or shoot wildlife, but if you have a licence (The DETR licence which allow the taking of pest species to preserve public health) then the law is in your hands.

Him and his motley crew were quite happy with the turnout.  I was quite shocked with people eating what they described as a “Pest” or “Vermin”. Do these fools actually care about what they eat, well no seems to be the answer, what idiots! 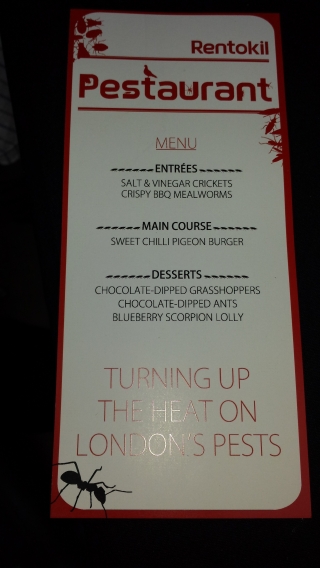 They failed to mention, it contains Venison and Bacon in the burger.  The poor sods queuing up really don’t know what they are eating.

If today is successful, they plan to do a pop-up in Birmingham and Manchester, then Europe.

Animals have a voice but no one is listening, let me be the interpretor
View all posts by animalsdohaveavoice →
This entry was posted in News Items and tagged rentokil wildlife act pigeon insects london kill. Bookmark the permalink.

1 Response to Why eat Pigeon if it’s vermin / pest ?